This next-generation multi-display controller Xtreme4fx offers four outputs and three inputs from a single box, leading to a myriad of possibilities for the end user.

Among many exceptional features, the high performance EMS 4fx is capable of DisplayPort 1.2 capture at 4K/UHD at 60fps and HDMI 1.4 4K capture at 30fps. All inputs and outputs support HDCP content and can be programmed and controlled independently through either a local USB connection or the on-board network interface.

Developed for true stand-alone operation, the non-volatile operation of the EMS 4fx can adapt to input changes by automatically adjusting all scale factors. The intuitive user interface allows customers to determine which input is used.

The EMS 4fx is suitable for projects of all sizes. Featuring high bandwidth DisplayPort1.2 loop-through, any of the device’s inputs can be daisy chained to build video walls of the largest scale imaginable. With dual Ethernet port capability, only one EMS 4fx in the chain requires connection to the physical LAN as Ethernet loop-through is supported on the second port, meaning multiple devices can be connected. Despite the potential size of installations that can be created using the EMS 4fx, the company has engineered the device to offer its simplest installation to date.
Ultimately, the EMS 4fx has been developed to meet increasing customer demand for design freedom in creating and deploying small, medium and large scale signage projects. Here, with the assistance of EMS’s Wall Designer software, even the most creative video walls can be produced with ease.
This hugely popular multi-screen design tool has been updated specifically to incorporate the EMS 4fx.

Network Connectivity
The EMS Xtreme4Fx has dual ethernet ports to allow users to add the device to their networks. Only one EMS 4fx in the chain requires connection to the physical LAN as ethernet loop through is supported on the second port, meaning multiple devices can be connected.

Video Wall Designer Software
The Video Wall Designer software allows users to add displays from the ever-expanding database of monitors. Users can also visualise their content by adding inputs, adjust display regions and instantly program all linked devices. With bezel correction, image rotation, cropping, scaling and mirroring options, as well as the ability to overlap or replicate any splice of the source material, there are limitless creative configurations.

Output Features
The outputs comprise a choice of four genlocked HDMI or DisplayPort HD 1080p connections. Each output monitor can take its input from any region of the input image as all of the required cropping, scaling, rotation and frame-rate conversion is handled by the EMS 4fx hardware. These regions can overlap to permit any output to replicate another, or can be configured to support any creative splice of the source material. This allows the support of many non-rectangular screen arrangements, as well as any mix of monitor orientations, permitting users to create an almost unlimited multi-monitor canvas.

We are continuously developing the technology used within our product ranges delivering outstanding innovative solutions, therefore the specification may change from time to time. 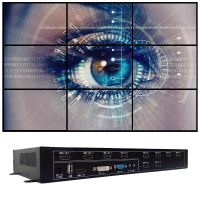